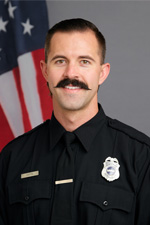 Congratulations to Engineer Grant Coffin who has been selected as the Burbank Fire Department 2019 Firefighter of the Year!

Engineer Coffin has 10 years of dedicated service with the Burbank Fire Department. He is a highly valued member of the Department. He is well respected for not only his work ethic and job knowledge but also his willingness to assist wherever needed. Personnel have taken notice of how and what Engineer Coffin does for the Department and they have used it as a road map towards success. When he is assigned a task, it will be completed with professionalism, enthusiasm and attention to detail. He embodies the Department’s Shared Values of integrity, ownership, compassion, innovation and excellence.

Operationally, Engineer Coffin is an ace! His abilities on the fireground specifically and emergency scenes in general make the City of Burbank a safer place. He applies his vast knowledge of truck/engine company operations safely and efficiently with due regard for the community and his peers. He shares his experience and knowledge with others thus providing a learning environment for personnel to reach their full potential. He does this with humility and respect.

Engineer Coffin has many additional responsibilities both inside and outside of the Department. He was vital in preparing the new KME engines for service by fabricating and outfitting various parts within their compartment space. Much of this work was conducted well after business hours between emergency calls or off-duty. His unselfishness and dedication were critical to completing the KME project. Also, he is a Director on Local 778’s Union Board where he is in charge of the October “Pink Shirt” campaign for Breast Cancer Awareness and “Ice Cream Scoops” fundraising for Muscular Dystrophy Association.

Engineer Coffin’s honest and positive perspective is greatly appreciated when discussing professional and personal topics. He has pride in his Department, station and crew which is demonstrated by his abundant contributions and endless striving for improvement.

Please join us in congratulating Engineer Coffin for this honorable recognition as the Burbank Fire Department 2019 Firefighter of the Year.